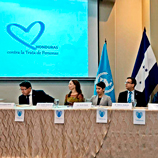 Tegucigalpa (Honduras), 1 October 2019 - In an effort to raise awareness against the crime of human trafficking, Honduras joined the United Nations Office on Drugs and Crime (UNODC) Blue Heart campaign on 23 September.

At least 194 people have been rescued in Honduras so far in 2019, according to the report of the Inter-Agency Commission Against Commercial Sexual Exploitation and Trafficking in Persons in the country, which coordinates the campaign with support from the United Nations Office on Drugs and Crime for Central America and the Caribbean.

The Blue Heart campaign was created in 2008 and signifies the desolation of the victims, the cold heart of the traffickers and the colour of the United Nations.

This campaign seeks to prevent crime and for institutions and civil society to denounce, inform and raise awareness about this scourge, considered the third most profitable illicit business in the world.

In addition to sexual exploitation, trafficking has other purposes, such as labour exploitation, begging and the illegal removal of organs, among others.

Currently, millions of human beings around the world are victims of this scourge and Honduras does not escape this reality due to its geographical location, an area of origin, transit and destination of trafficking, among other crimes, according to Honduran authorities.

In this Central American country, the majority of victims of this crime are women and girls.

Trafficking is a crime that consists of capturing and retaining a person by force or coercion for the purpose of sexual, labour, or other exploitation.