New UNODC report: Coca crops in Colombia increase over 50 per cent in one year 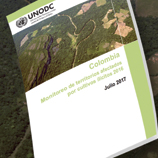 According to the same report, the highest growth was seen in Colombian departments located in borders, particularly Nariño, Putumayo and Norte de Santander, the same territories with the biggest coca crop area according to the 2015 survey.

Regarding the potential production of cocaine for 2016, the estimate was of 866 metric tons, an increase of 34 per cent compared to 2015, which saw 646 metric tons.

This year report also records that prices of coca leaf in 2016 were 43 per cent higher than prices in 2013, when coca cultivation began to increase.

While the latest survey results are disappointing, there are positives, including an increase of 49 per cent in seizures of cocaine - from 253 tons confiscated in 2015 to 378 tons in 2016.

The conditions in the country are favorable to reaching a sustainable solution since the country's strategy is moving from a crop-based intervention to one focusing on the transformation of the territories.

The Government of Colombia and local communities are building trust to reach effective and sustainable solutions. This will require coordinated, localized and comprehensive actions that address illicit economies and organized crime, allow communities to make decisions without the pressure of illegal armed groups, and promote legal alternatives to guarantee the development of territories.