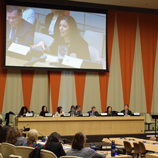 New York, 10 April 2019 - Combatting trafficking and gender-based violence while enhancing crime prevention and criminal justice responses was the focus of the United Nations Office on Drugs and Crime's (UNODC) engagement at the 63rd Commission on the Status of Women (CSW), held from 11 to 22 March at UN Headquarters in New York.

The meeting of the Commission, the UN's largest annual gathering on gender equality and women's rights, dates back to 1947 and convenes more than 9,000 representatives from civil society organizations.

As highlighted in the 2018 UNODC Global Report on Trafficking in Persons, 72 per cent of all detected victims of human trafficking are women and girls. With a view to countering this problem, UNODC's New York Office participated in a panel discussion on "Modern Slavery and Human Trafficking: Effective Responses for Women and Girls", organized by the Permanent Missions of Argentina, Australia, Belarus, Kenya, Lichtenstein and the Netherlands.

"There exists a gap between the world of policy and the realities on the ground", said Ms. Simone Monasebian, Director of UNODC's New York Office, while highlighting that this gap can be filled by elevating the voices of survivors. Recalling that the need to take urgent action against human trafficking has been recognized by the 2018 Nobel Peace Prize awarded to Nadia Murad, the UNODC Goodwill Ambassador for the Dignity of Survivors of Human Trafficking, Ms. Monasebian concluded that "through her words and actions, Nadia reminds us that we must always listen to the people who have been harmed by the crimes we seek to stop."

During the panel discussion "Preventing the Trafficking of Women and Girls for Sexual Exploitation: Understanding States' Obligations to Address Demand Under the Palermo Protocol", organized by UNODC, OSCE, Equality Now and the Coalition Against Trafficking in Women, Ms. Monasebian highlighted that women and girls are disproportionally impacted by human trafficking, particularly in the context of sexual exploitation. Ending such gender-based violence needs to include the full implementation of the UN Convention against Transnational Organized Crime and its Protocol to Prevent, Suppress and Punish Trafficking in Persons, especially Women and Children.

During the panel discussion "Addressing Vulnerability: Collaborative Approaches to Trafficking Prevention through a Human Rights Lens", organized by the Permanent Mission of Belarus and the NGO Committee to Stop Trafficking in Persons, Ms. Monasebian highlighted the need to promote collaboration between states, civil society, survivor advocates and the UN system as key to trafficking prevention.

The provision of essential services to women and girls subject to gender-based violence was the focus of UNODC's participation in the discussion "The Importance of a Coordinated Community Response in Responding to Violence Against Women and Girls", organized by Global Rights for Women, the Australian Women Against Violence Alliance, the Basque Institute for Women as well as the UN Joint Global Programme on Essential Services for Women and Girls Subject to Violence.

UNODC also attended the launch of "Equality in Law for Women and Girls by 2030: A Multistakeholder Strategy for Accelerated Action", issued by UN Women and multi-stakeholder partners in close collaboration with UNODC and others.

A further focus of UNODC's engagement during the CSW was the rehabilitation and reintegration of women formerly associated with terrorist groups, which was the theme of another panel discussion that the Office co-sponsored with the Permanent Missions of Qatar, Canada, Pakistan, UN-OCT. Among other things Ms. Monasebian highlighted that UNODC is assisting Member States in integrating a gender perspective and mainstreaming women's rights in their criminal justice responses to countering terrorism.

Equality in Law for Women and Girls by 2030: A Multistakeholder Strategy for Accelerated Action