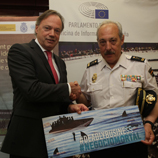 2 June 2017 - Led by the Director-General of the Spanish National Police, Spain formalized yesterday its adoption of UNODC's #DeadlyBusiness campaign to raise awareness on the crime of smuggling of migrants and its associated risks, becoming the first European country to join the initiative. Being a European Union funded project, the European Commission Representation in Spain hosted the event.

The campaign first took off in 2015 when Mexico became the first country in the world to adopt the #DeadlyBusiness initiative. Ever since, the campaign has gained support in many parts of the world including numerous multilateral fora such as the Ibero-American Association of Public Prosecutors Offices (AIAMP) in Lisbon, the Regional Conference on Migration and Washington D.C.

With Spain, UNODC has now a new partner to promote the campaign within the European continent and to take the awareness raising messages to countries of origin and transit of smuggled migrants. With this objective in sight, UNODC and the Spanish National Police have jointly developed new communication tools for Spanish speaking audiences, which are further translated into Arabic and French. Through Spain's consular network, the campaign will also be promoted in key countries in the North Africa.

During his opening remarks, Aldo Lale-Demoz, UNODC Director of the Division for Operations and Deputy Executive Director, highlighted that #DeadlyBusiness aims to reach three different audiences: law enforcement authorities, who must be sensitized to the human rights of migrants; potential migrants, who must have information on the risks of contracting the services of smugglers by land, sea and air; and the media, who plays a central role in bringing this information to migrant communities of origin and transit.

During the presentation of the campaign tools, Felipe De La Torre, UNODC Programme Management Officer, said that "because of its universal language, #DeadlyBusiness is easily adaptable to the context of those countries where the prevention of this crime, as it happens in Spain, is a priority."

The #DeadlyBusiness campaign was developed in Spanish and translated into Arabic, English, French and Portuguese. The campaign material includes posters, videos, a toolkit, infographics and radio spots and illustrates each of the smuggling methods used by criminals, covering land, sea, and air.

Get to know more about the campaign and access all the materials at  www.unodc.org/negociomortal