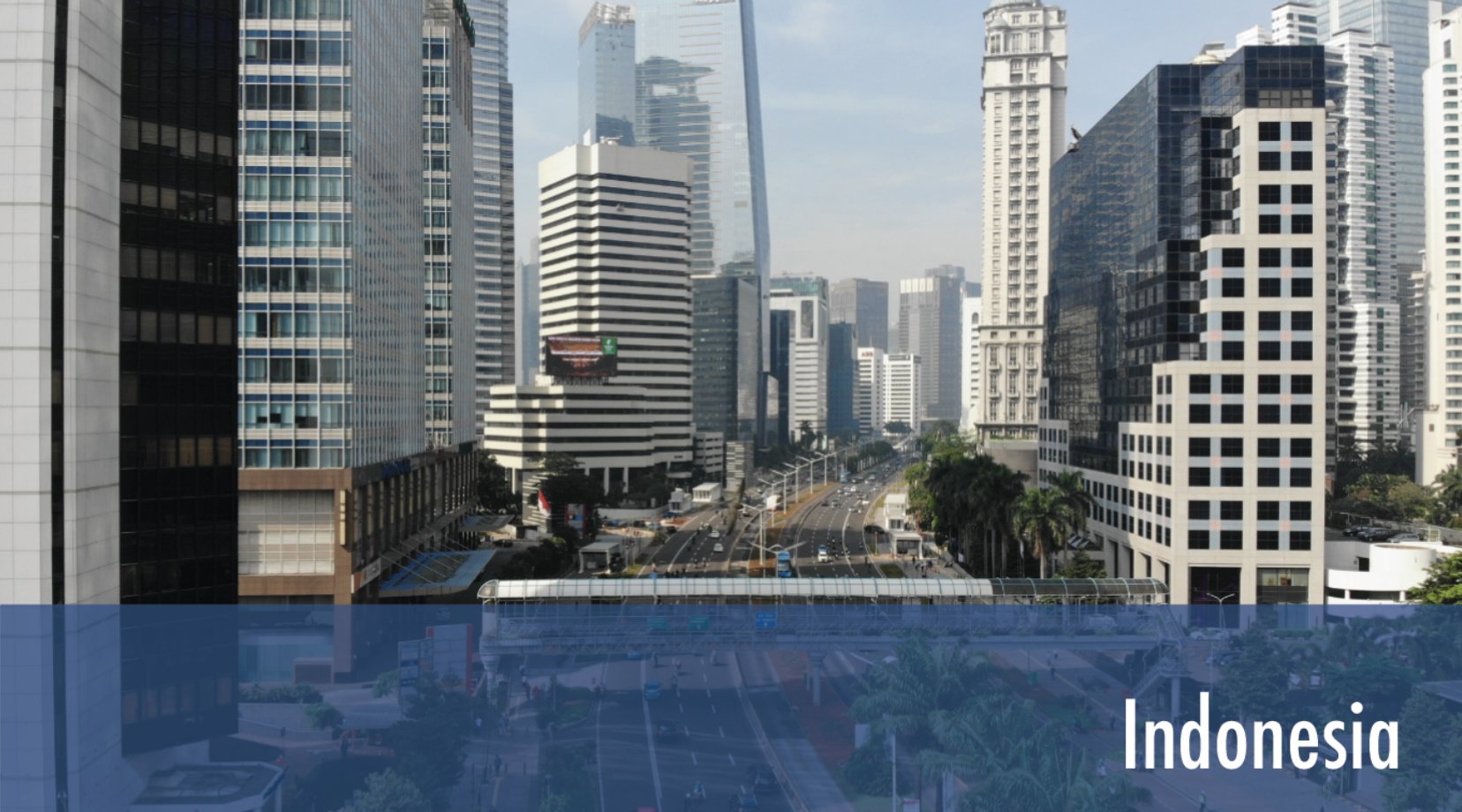 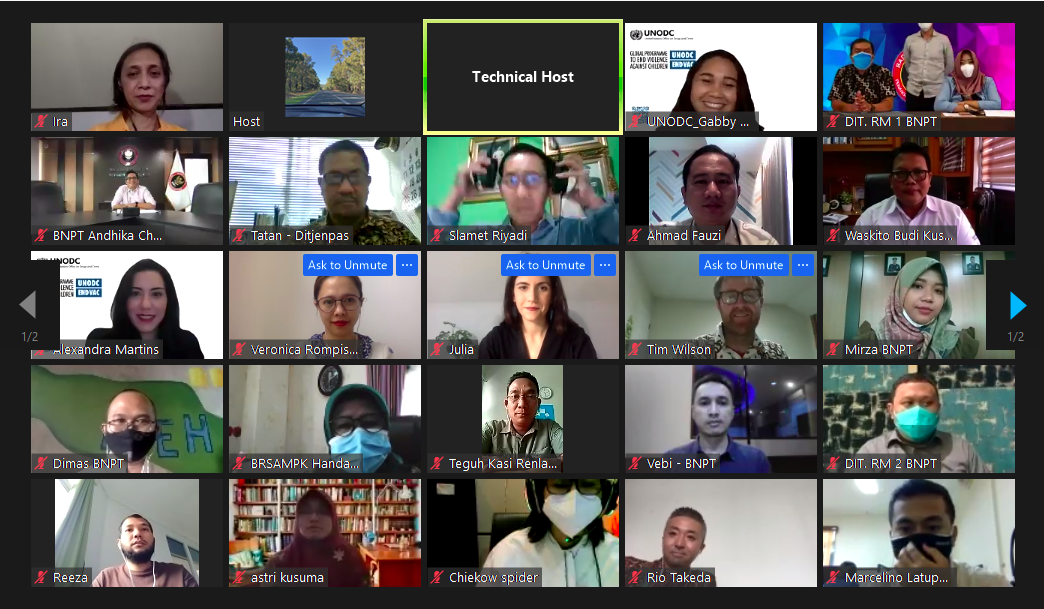 November 2020 - First Steps of the Bali Call for Action: UNODC and Indonesia join hands to strengthen rehabilitation and reintegration strategies for children associated with terrorist groups

Children who become associated with terrorist and violent extremist groups are exposed to violence, insecurity and neglect of their most basic needs. The Government of Indonesia is determined to tackle this phenomenon decisively, with UNODC’s support.  In partnership with the Indonesian Counter Terrorism Agency (BNPT) and with the support of Japan, UNODC organized a three-day capacity-building workshop focusing on planning rehabilitation and reintegration strategies for these children. Held on 11 – 13 November, the workshop brought together policy makers and professionals from the key national institutions involved in responding to the threat of terrorism in Indonesia and its devastating effects on children’s lives.

This workshop is not an isolated event. Rather, it is part of consistent efforts by the national government to strengthen policies and practices to support these children during their reintegration journey.  In March 2020, the Government of Indonesia launched the “Bali Call for Action” (see the video). This historical political declaration endorses the ‘UNODC Roadmap for the Treatment of Children Associated with Terrorist and Violent Extremist Groups’, and commits to turning its key principles into action at the national level. “UNODC has found an invaluable partner In the Government of Indonesia, to defend the cause of these children” stated Alexandra Martins, Coordinator of the UNODC Global Programme to End Violence against Children.

The national Government is committed to multiplying efforts in this area of work, including through the design and provision of specialized training. The workshop, which was held virtually to overcome travel and safety challenges linked to the COVID-19 crisis, responds to national needs to expand and harmonize existing practices in regards to rehabilitation and reintegration of children. Participants discussed the root causes of the phenomenon with UNODC experts, as well as practical strategies and tools to boost support for children through multi-disciplinary and coordinated approaches. “It is essential for these children to be recognized and treated as victims, if we want to promote a sense of belonging and support their futures,” said a professional from the Handayani rehabilitation centre.

In the course of the sessions, participants identified the key objectives of rehabilitation and reintegration strategies at the national level, to ensure that they effectively respond to the needs of children as well as those of their communities. In concluding the workshop, Indonesian policy-makers and professionals elaborated a series of recommendations to strengthen provisions concerning children in its forthcoming National Action Plan to Counter Terrorism.

Thanks to the generous contribution of the Government of Japan, a “kick off” meeting was held between UNODC and representatives from the Government of Indonesia to commence a consultative process to support the Governments’ efforts in promoting the rehabilitation and reintegration of children associated with terrorist and violent extremists groups.

As a result of the interest expressed in implementing the UNODC Roadmap, it was agreed that UNODC will undertake consultative meetings with various national counterparts to identify country priorities and technical assistance needs to protect children from terrorism. This process started in July and has the objective to provide a solid foundation and sound analysis to support implementation of the Bali Call for Action in Indonesia.

National workshop on 'Facilitating access to justice for victims in the context of the National Human Rights' Strategy'... read more

Launch of the UNODC Roadmap in Mozambique... read more 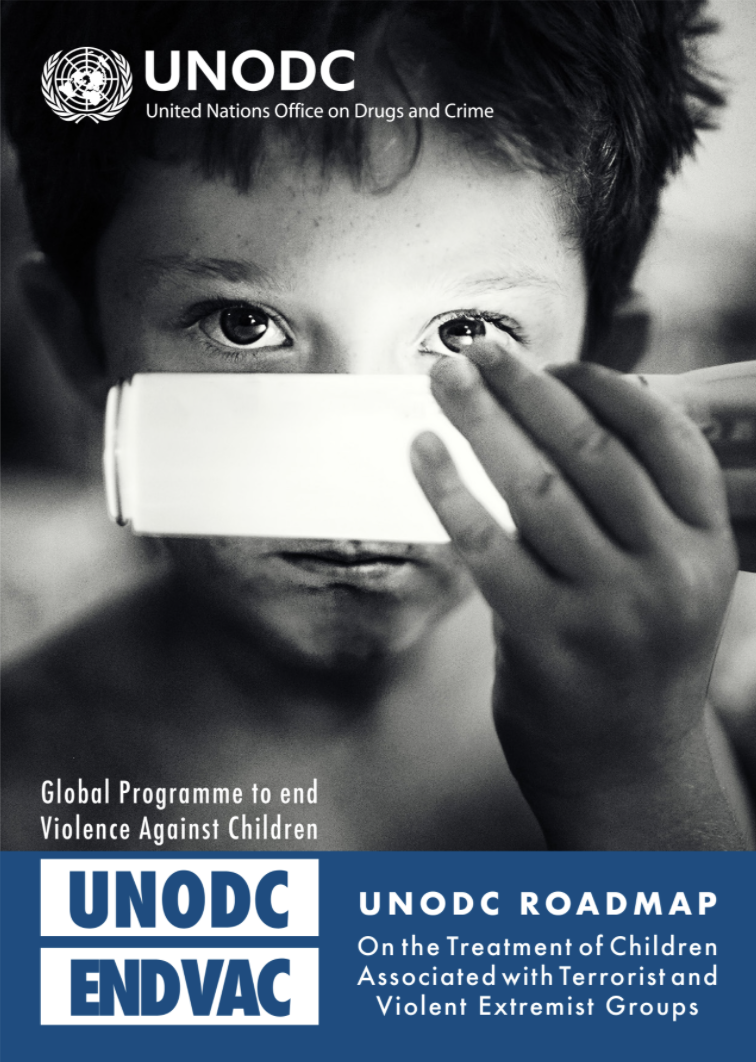 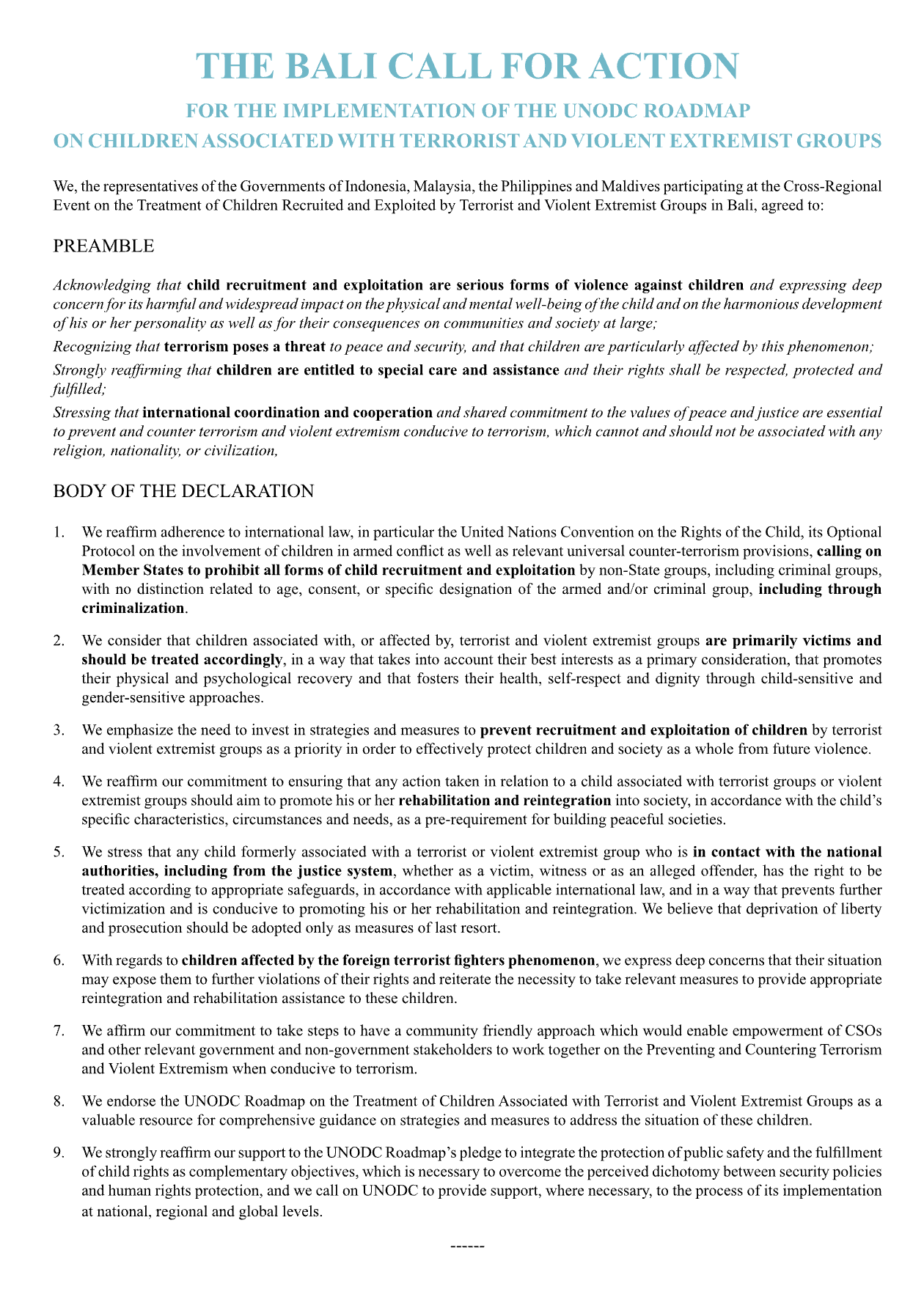 Read the Bali Call for Action 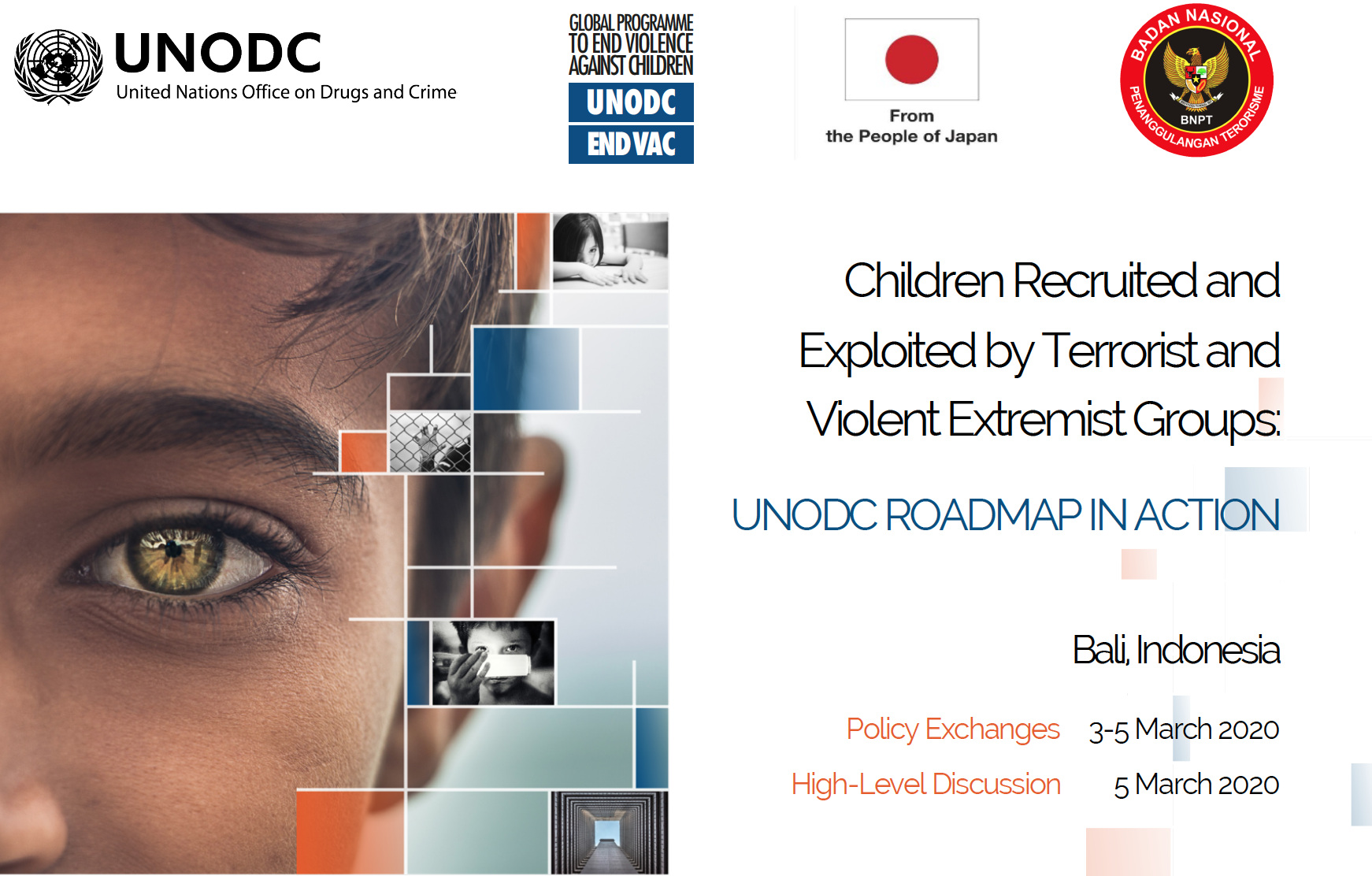 Bali, March 2020 - Protecting children from terrorism: Indonesia launches the “Bali Call for Action for the implementation of the UNODC Roadmap”

Terrorism is a global threat that disproportionately affects children. On 3 March 2020 high-level representatives from Indonesia, Malaysia, Maldives and the Philippines gathered in Bali in an event co-organised by Japan, Indonesia and the United Nations Office on Drugs and Crime (UNODC) reached political consensus on the urgency to tackle child recruitment and its consequences on children’s lives.

Opening the Event, the representative from Japan presented the value of the UNODC Roadmap for the guidance it contains on how to prevent child involvement with terrorist groups and how to rehabilitate and reintegrate these children. He pledged Japan’s continued support to countries for the implementation of the Roadmap.

In her remarks, the Prosecutor of the International Criminal Court (ICC), Ms. Bensouda, stated: “I applaud the UNODC Roadmap, which recognizes the need to work together and highlights areas closely linked to the mandate of my Office and of the Court, such as prevention and justice.” She also stressed the need to hold perpetrators of serious crimes against children accountable.

Building on its dual mandate on violence against children (VAC) and counter-terrorism, UNODC has been assisting countries facing these challenges for the past five years. Alexandra Martins, coordinator of the UNODC Global Programme to End VAC, expressed how "children associated with terrorist groups are to be considered and treated primarily as victims”, highlighting that “investing in their rehabilitation and reintegration is not an alternative to security, but a pre-requirement because there is no dichotomy between preserving public safety and protecting children”.

High-level discussions led to the identification of priority actions at national level. Representatives from Malaysia stressed education and awareness-raising as key components of any effective prevention strategy to protect children from recruitment.  The Filipino delegation highlighted the need to ensure that children who are in a situation of armed conflict are treated according to international law, as also reflected in the Key Principles of the Roadmap. One of the areas on intervention identified by the Government was the need to equip frontline officers with child-sensitive training and child-friendly communication skills.

The Government of Indonesia illustrated current efforts towards the rehabilitation and reintegration of children affected by terrorism. As a result of the Event, Indonesia took a step ahead and officially launched the “Bali Call for Action”, a political declaration which endorses the UNODC Roadmap and commits to translate it into action at the national level. With this initiative, Indonesia also called upon Member States to join this historical declaration as a unique opportunity to adopt a common approach to protect children from terrorism.

1. The Bali Call for Action