Consequences of harms to wild flora

The unsustainable exploitation of wild flora, especially illegal exploitation, can have devastating effects on ecosystems and sustainable livelihoods. The sections below explore the environmental, social, and security consequences of such exploitation.

Forests provide a number of ecosystem functions and are crucial to the health and survival of life on earth. Especially in light of an ever-increasing threat posed by climate change, the role of forests in capturing and storing carbon becomes paramount. In addition to more than 60,000 different tree species, forests are also home to a broad array of fauna, including 75 percent of bird and 68 percent of mammalian species (FAO and UNEP, 2020). Tropical rainforests are particularly important for global biodiversity. They cover some six percent of the earth’s land surface, and their terrestrial and aquatic habitats contain more than half of all known species (Wilson, 2002).

Illegal exploitation of wild flora, especially in the form of large-scale illegal logging operations, threatens the environment by causing deforestation, forest fragmentation and biodiversity loss. This is not only due to the felling of trees but also to the construction of roads and infrastructure necessary to access forests for logging (Barber et al., 2014). Deforestation threatens ecosystems, biodiversity and even rainfall and climate. Over the long term, deforestation limits carbon sequestration (the storing of carbon in trees and forest soils). In 2019, an estimated 12 percent of global greenhouse emissions were derived from deforestation (Brack, 2019).

This is not to say that only the loss of trees is problematic. While the extraction of non-timber forest products is less harmful for the environment than large-scale illegal logging operations (Chou, 2018), harvesting them can adversely affect soil nutrients (Ruwanza and Shackleton, 2017) and can reduce plant diversity, which in turn is an important factor for resilient and strong ecosystems (Tilman et al., 1997).

The saguaro cactus (Carnegiea gigantea) has become an iconic species of the North American “wild west” and is often subject to poaching for collectors and decoration. While a legal market in saguaro cacti exists, they are frequently being poached in national parks.

The saguaro’s demise is not only devastating for its own species, but to a wide range of others that depend on it: “In the desert’s most arid spots, pack rats, rabbits, deer and bighorn sheep gnaw the flesh of young cacti to find precious moisture. Gila woodpeckers and gilded flickers excavate nest cavities in the columns of taller plants, raising their young in spine-fortified towers high above the bobcats, coyotes and other predators that prowl the desert floor. When these birds move on, small owls, finches and sparrows frequently move in. Red-tailed and Harris’s hawks hunt from cactus-top perches and assemble their stick nests among saguaros’ arms. Nectar from saguaros’ creamy blossoms nourishes two species of long-nosed bats. And in the dry, lean days of midsummer, ripe saguaro fruits help sustain a roster of desert birds, mammals, reptiles and insects.” The saguaro cactus is a vital element in these desert habitats, and poaching threatens the delicate balance in this ecosystem (Warren 2019, “Pillars of the community”, para. 2).

In the U.S., saguaros are protected under the Endangered Species Act, making poaching of the cactus in the wild illegal. In 2013, a U.S. citizen was sentenced to five years supervised probation and a USD 32,000 fine for poaching and exporting saguaro cacti (view this case in UNODC’s SHERLOC knowledge management portal for more information).

In October 2015, a U.S.-based company selling wooden flooring products was sentenced to pay more than USD 13 million in fines, including criminal fines, due to its failure to exercise due diligence in sourcing its timber. On several occasions between 2011-2013, the company had purchased timber accompanied by fraudulent export declarations. Much of the timber in question was Mongolian oak and Korean pine sourced from the Russian Far East, a region in which illegal logging has been an acknowledged problem for years.

For the sentencing, the negative environmental consequences of illegal logging for endangered wild fauna were considered. In addition to the Mongolian oak and Korean pine, Russia’s far eastern temperate forests are home to the last living wild populations of Siberian tigers (Panthera tigris altaica) and amur leopards (Panthera pardus orientalis). Illegal logging of the temperate forests threatens the habitats of both big cats. Furthermore, the prey of the big cats, such as deer and boars, depend on the trees’ acorns and nuts as a food source.

Humanity depends on various services from wild flora, such as food, water, and natural material for housing (including timber). Furthermore, wild flora is an important source for traditional and modern medicine as an estimated 60-90 percent of medicinal and aromatic plants are sourced from the wild (Jenkins et al., 2018). Herbal medicine has played an important role in the history of human healthcare. Worldwide, more than 5000 flowering plants are used for medicine due to their bioactive components (Kalaivanan et al., 2017). Around 80 percent of Traditional Chinese Medicine is based on plants and 25 percent of all pharmaceuticals are plant-based. A commonly known example is aspirin, which is obtained from the willow tree (Jenkins et al., 2018).

Current flora extinction rates are highly problematic given that large numbers of plants are still unknown to humans; the potential loss of new sources for medicines and food crops is a risk. For example, in 2019 alone, 3,828 new species of flora and fungi were scientifically described for the first time (Antonelli et al., 2020).

Moreover, illegal exploitation of wild flora has direct negative consequences on the lives of many communities that depend on flora for their livelihoods. Around the world, roughly one third of humanity is heavily dependent on forests and forest products. Of those, around 820 million people live in tropical forests and savannahs in developing countries (FAO and UNEP, 2020). Non-timber plants can be a significant contributor to household incomes. One study examining socio-economic conditions of villages in Northern Benin found that collecting and selling non-timber flora accounted for 39 percent of household income (Heubach et al., 2011). Similarly, 26 percent of European households gather non-timber plants for their livelihoods, especially in Eastern Europe, amounting to approximately EUR 23 billion in economic value per year. These products include wild berries, forest nuts, wild mushrooms, truffles wild medicinal and aromatic herbs, as well as decorative and other products (see figure 3 below) (Lovrić et al., 2020). Illegal forest conversion, illegal logging and plant poaching deprive those communities of essential goods, which play a crucial role for their culture and livelihoods (see box below). 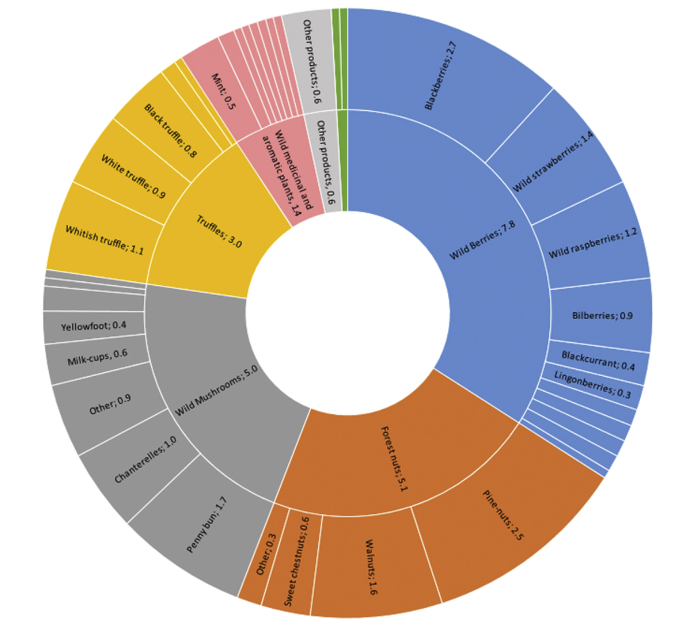 White sage (Salvia apiana) is a shrub native to North America. It can be found in the southwestern parts of the United States of America, as well as in north-western Mexico. In addition to its medicinal use, white sage is of cultural importance to some populations of Native Americans who use it as a spiritual plant.

In recent years, however, white sage has been subject to increased commercialization spurred by, among other things, the wellness industry. White sage growing in protected areas has been increasingly targeted by plant poachers to meet the demands of this market. In California, rangers reported that poaching incidents of white sage skyrocketed in 2017, leading to multiple seizures of more than 1000 pounds at that time. In 2018, four people were arrested after they had been found with 400 pounds of white sage. Illegally removing plant material from public use areas is a misdemeanour in California.

The illegal exploitation of wild flora can have detrimental security consequences. Flourishing illegal economies provide opportunities for organized criminal groups, which are often linked to the systematic use of violence in relation to the illegal exploitation of wild flora and forest resources. The violence not only negatively impacts local communities, but also the officers tasked with preventing these crimes. Examples of violence against enforcement officers and environmental defenders can be found across continents. Butt et al. (2019) analysed the database of the NGO Global Witness and found that over a span of 15 years (between 2002 and 2017), the number of recorded deaths of ‘environmental defenders’ (defined by Global Witness as people who take a stand and peaceful action against the unjust, discriminatory, corrupt or damaging exploitation of natural resources) doubled, from an average of two to four per week.

Furthermore, there are well-documented cases establishing the relationship between illegal timber exploitation and armed conflicts (Boekhout van Solinge, 2014). In some rare cases, timber and forest exploitation have been linked to war crimes. The term “conflict timber” refers to timber trade that is believed to be related to armed conflicts. More specifically, proceeds from the sale of the illicit timber are known or suspected to be used to finance conflicts by enabling the procurement of weapons, among others (Boekhout van Solinge et al., 2016).

Another security consequence resulting from illegal exploitation of wild flora is the increased risks posed by zoonotic diseases. Deforestation can increase human-animal contact, and some animals can carry viruses that are potentially dangerous to humans (Olivero, 2017). Prior to the outbreak of COVID-19, various experts expressed concerns that the next pandemic could come from forests, as has happened in the past (see box below). Such a concern was already well established among infectious disease experts, who understand deforestation to be a potentially strong driver of infectious disease transmission (Zimmer, 2019; Vidal, 2020). Wildlife trafficking and deforestation are among the various factors that may contribute to the spread of zoonotic diseases (UNODC, 2020).

Example: How deforestation caused the emergence of the Nipah virus in humans

In 1997, forest fires were used to clear significant parts of Indonesian forests for agriculture. The resulting thick smoke prevented the remaining trees from producing fruits, which caused the local fruit bat populations to migrate to new feeding grounds, in orchards in Malaysia. Fruit bats can carry the deadly Nipah virus, which until then had not occurred in humans. The transmission of the Nipah virus from the bats to humans was believed to occur when Malaysian farmers and their pigs ate the fruits from the orchard trees, from which the fruit bats had already taken bites.

Two years after the forest fires that caused the migration of fruit bats, more than 200 people had developed dangerous brain inflammations, and more than half perished. Since then, Southeast Asia has been subject to multiple outbreaks of the virus.

Timber was a major source of income for Liberian president Charles Taylor’s operations during the civil war. Taylor used the Strategic Commodities Act from 1999 to gain full control over all commercial contracts with investors for commodities exploitation in Liberia. Essentially, private companies investing in Liberia’s timber industry funded and prolonged the civil war.

In the period 2000-2003 Liberian timber was discussed on various occasions in the UN Security Council. In 2000, the UN's Expert Panel Report on Sierra Leone had found that Liberia's timber industry was related to arms trafficking to Sierra Leone. In 2003, the UN Security Council imposed timber sanctions against Liberia, which thus lost its main source of foreign revenue. Within a month, Charles Taylor resigned following international pressure.

In 2013, Charles Taylor was condemned by the Special Court for Sierra Leone (SCSL) for war crimes and crimes against humanity. Similarly, in 2017, a Dutch Court found Guus Kouwenhoven, the largest timber entrepreneur in Liberia at the time, and close associate of Taylor, guilty of war crimes.

Romania is home to more than half of Europe’s old-growth forests, and these forests contain a high level of European biodiversity, including bears, wolves, lynx, and wildcat.

Romania’s forests are also targeted by illegal loggers. Romsilva, Romania's state-owned forest management company, cited an alarming number of attacks against forestry workers who were trying to protect against "wood thieves." In 2018 there were at least 16 such attacks. In 2019, two forest rangers were killed in the same month during similar attacks.

In 2020, Romania’s Minister for the Environment stated that almost half the country’s timber was logged illegally. In a bid to protect the country’s forests and combat widespread illegal logging, Romanian authorities arrested 166 people and charged them with illegal logging.