Some criminals might be content to serve time in prison, if they know their assets will be available upon release, or that their non-incarcerated families may continue to enjoy the proceeds of crime. This is why confiscation of assets is such an important measure to prevent and combat organized crime. It is also an equally important tool to prevent organized crime infiltration of the legal economy.

Confiscation is also known as forfeiture in some jurisdictions. The two terms will be used interchangeably in this Module. Confiscation of assets or property is the permanent deprivation of property by order of a court or administrative procedures, which transfers the ownership of assets derived from criminal activity to the State. The persons or entities that owned those funds or assets at the time of the confiscation or forfeiture lose all rights to the confiscated assets (FATF, 2017; McCaw, 2011; Ramaswamy, 2013).

The large revenues generated from organized crime activity can affect the legitimate economy and in particular the banking system adversely through untaxed profits and illicitly funded investments. Furthermore, even after having invested in the legal economy, organized criminal groups often continue to use illicit tools and methods to advance their business, potentially pushing other businesses out of the market. Confiscation of assets is a way to undermine the fiscal structure and even the survival of an organized criminal group by seizing illicitly obtained cash and any property derived from criminal activity (Aylesworth, 1991; Baumer, 2008; U.S. Executive Office for Asset Forfeiture, 1990). 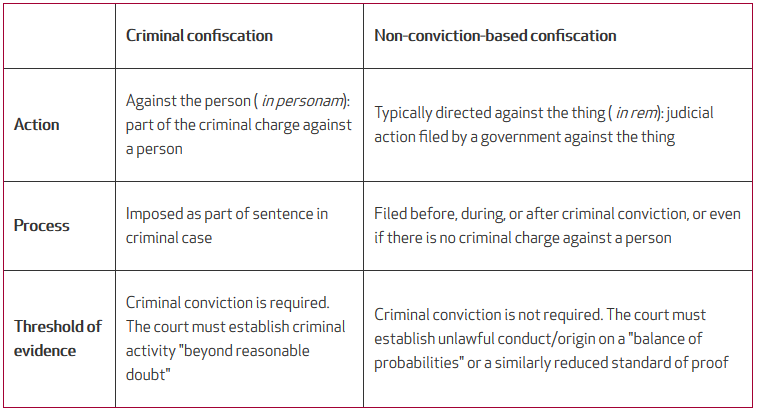 Furthermore, States might decide to adopt a value based approach to confiscation, which enables a court to impose a pecuniary liability (such as a fine), once it determines the benefit derived directly or indirectly from the criminal conduct. Value-based confiscation is also included in article 12 (1)(a) of the Organized Crime Convention. It is also worth mentioning that, in some countries, assets may be confiscated even if they are not directly linked to the specific crime for which the offender has been convicted, but clearly result from similar criminal activities (i.e. extended confiscation).

Growing use of confiscation offers the opportunity to disrupt continuing illicit enterprises and to curtail the effect of large amounts of illicitly obtained cash on the economy. There has been a growing body of case law and policy regarding the seizure and disposition of property in asset forfeiture cases.

Concerns regarding the seizure and disposition of property include:

In common law jurisdictions, an order to restrain or seize assets generally requires judicial authorization (with some exceptions in seizure cases). Legal systems may have strict obligations to give notice to investigative targets, such as when a search or production order is served on a third party such as a financial institution. That third party may be obliged to advise their client of the existence of such orders, which means that the client would be forewarned about an investigative interest. That must be taken into consideration when taking steps to secure assets or use coercive investigative measures (UNODC, 2012).

The legal principle behind confiscation or forfeiture is that the government may take property without compensation to the owner if the property is acquired or used illegally. There are several broad mechanisms for accomplishing this, however the three predominant types of processes used to confiscate property are: administrative (no conviction), property or criminal (conviction-based), and value-based (UNODC, 2012).

In a conviction-based confiscation, property can only be seized once the owner has been convicted of certain crimes. Criminal confiscation is a common approach to asset confiscation in which investigators gather evidence, trace and secure assets, conduct a prosecution, and obtain a conviction. Upon the conviction, confiscation can be ordered by the court. The standard of proof required (normally proof beyond a reasonable doubt) for the confiscation order is often the same as that required to achieve a criminal conviction.

A non-conviction-based confiscation occurs independently of any criminal proceeding and is directed at the property itself, having been used or acquired illegally. Conviction of the property owner is not relevant in this kind of confiscation.

Administrative confiscation generally involves a procedure for confiscating assets used or involved in the commission of the offence that have been seized in the course of the investigation. It is most often seen in the field of customs enforcement at borders (e.g., bulk cash, drug, or weapons seizures), and applies when the nature of the item seized justifies an administrative confiscation approach (without a prior court review). This process is less viable when the property is a bank account or other immovable property. The confiscation is carried out by an investigator or authorized agency (such as a police unit or a designated law enforcement agency), and usually follows a process where the person affected by the seizure can apply for relief from the automatic confiscation of the seized property, such as a court hearing. All proceeds of crime are subject to confiscation, which has been interpreted to include interest, dividends, income, and real property, although there are variations by jurisdiction (for more information, please see StAR's " A Good Practice Guide for Non-conviction-based Asset Forfeiture").

Whereas the Organized Crime Convention does not make reference to this type of confiscation, the Convention against Corruption includes it in article 54 (1)(c), which encourages States to "consider taking such measures as may be necessary to allow confiscation of [property acquired through or involved in the commission of an offence established in accordance with this Convention] without a criminal conviction in cases in which the offender cannot be prosecuted by reason of death, flight or absence or in other appropriate cases".

Some jurisdictions elect to use a value-based approach, which is a system where a convicted person is ordered to pay an amount of money equivalent to the value of their criminal benefit. This is sometimes used in cases where specific assets cannot be located. The court calculates the benefit to the convicted offender for a particular offence. Value-based confiscation allows for the value of proceeds and instrumentalities of a crime to be determined and assets of an equivalent value to be confiscated.

Protecting the rights of third parties

Concern arises regarding the rights of individuals not involved in criminal activity, but whose property is used in, or derived from, the criminal activity of others (Friedler, 2013; Geis, 2008; Gibson, 2012; Goldsmith and Lenck, 1990). This might include uninformed lien holders and purchasers, joint tenants, or business partners. A person who suspects his or her property is the target of a criminal or administrative confiscation investigation may sell the property, give ownership to family members, or otherwise dispose of it.

Third-party claims on seized property are sometimes delayed in criminal confiscations because the claim often cannot be litigated until the end of the criminal trial. In an administrative confiscation, the procedure moves more quickly because the confiscation hearing usually occurs soon after the confiscation. In some jurisdictions, third parties are protected under the 'innocent owner' exception for non-conviction-based confiscations, if the government fails to establish that they had knowledge, consent, or wilful blindness to illegal usage of the property.

Some of most commonly confiscated assets are cash, cars and weapons, as well as luxury property such as boats, planes and jewellery. Residential and commercial property are also subject to confiscation. Once an asset is confiscated, it must be appraised to determine the property's value, less any claims against it. The item must be stored and maintained while ownership and any third-party claims are heard in court. If the challenge to the confiscation is not effective, the property is taken for government use or auctioned.

There has been controversy over the use of confiscated assets by some law enforcement agencies. Laws in some jurisdictions earmark specific uses for confiscated assets, such as for education costs. Some have claimed that confiscation of assets that are kept by police provide an incentive for spurious or aggressive confiscations (Bartels, 2010; Skolnick, 2008; Worrall and Kovandzic, 2008).