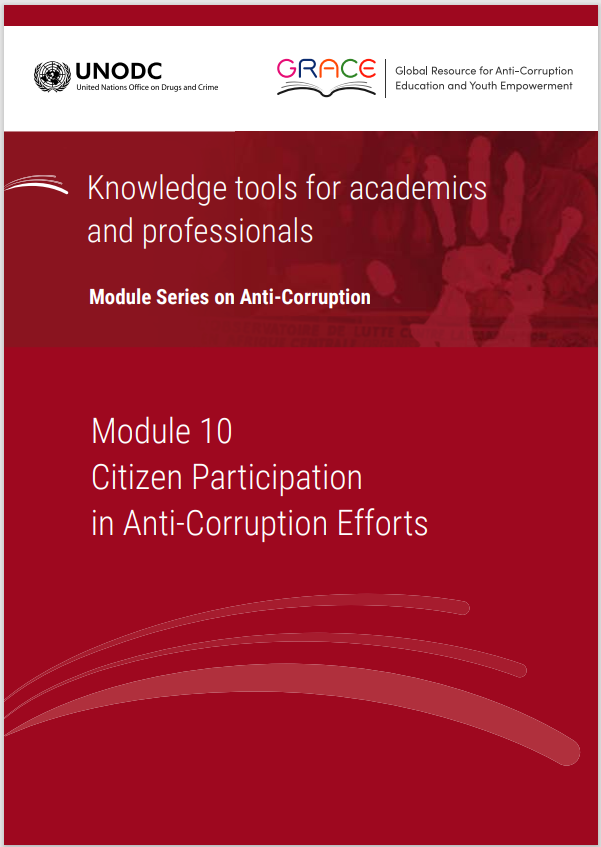 The role, risks and challenges of CSOs fighting corruption

Starting in the late eighteenth century, civil society has been conceived as separate from state institutions. CSOs came to be seen as a means of defence against despotism and other potential abuse by political leaders (Bratton, 1994; Spurk, 2010). In the last 20 years, "thanks to the development of new communication technologies, especially the Internet, CSOs have become more and more global and have become a new regulation agent both at a national (or regional) and global levels" (Desse, 2012). CSOs play a growing role in economic, social and environmental issues and have an increasing influence on global governance issues (Desse, 2012).

There are different roles that CSOs, as well as academia, can play in anti-corruption efforts. Kamstra (2017) conceives of these as an educational role, a communicative role, a representational role and a cooperative role, stressing the fact that CSOs do not operate as monolithic or homogenous entities. More concretely, anti-corruption roles of CSOs include education, research, monitoring, awareness-raising, advocacy, mobilization and organization, and the promotion of private prosecutions where possible. Specific case studies from Indonesia, India, Brazil and Argentina, where CSOs were successful in exposing and fighting corruption are discussed in this QoG working paper by Marcia Grimes (2008).

Like the media, CSOs can hold officials accountable and pressure the State to take necessary action against corruption. Some CSOs, such as Global Integrity and the Organized Crime and Corruption Reporting Project (OCCRP), were founded by investigative journalists who sought an additional outlet to address corruption issues. Other CSOs, like the NGO Transparency International, have become a point of reference for corruption scholars and activists on all continents. Transparency International is not structured centrally, but with national chapters located in many countries, represents an ideal type of network for a social movement organized around a collection of autonomous and independent actors unified by a common anti-corruption goal (De Sousa, 2005).

At the same time, CSOs and individuals involved in the fight against corruption face the risks of being harassed, harmed and compromised by powerful elites. According to Essoungou (2014), for example, CSO staff in Nigeria are often "poached" by corrupt officials and offered lucrative posts in government while CSOs in Congo and Uganda often face police or judicial harassment. Other challenges, elaborated upon further by VanDyck (2017), include long-term sustainability and funding. In some cases, the CSOs themselves become corrupt. Corruption scandals involving CSOs have occurred in many countries, e.g. Finland, Honduras, Nigeria, USA and others (Smith, 2010; Trivunovic, 2011).

An additional challenge to successful CSO participation is the use of CSOs as political instruments. This can occur, for example, when a public official or government member, or their relative, runs an anti-corruption CSO. In such cases, a serious conflict of interest arises. It is then questionable whether the CSO acts in the public interest. Furthermore, if most of the CSOs in a given country are run or owned in the same manner, then instead of taking the necessary actions to hold officials to account, or to pressure the State to implement reforms and increase transparency, the CSOs might do the opposite and in fact contribute to more corruption.

A further challenge is that CSO participation can sometimes be driven by top-down, one-size-fits-all approaches. This is because most civil society projects are funded by foreign aid programmes and, to attract donors' support, CSOs often espouse a whole range of worthy causes with an overt anti-corruption agenda, which flows from previous projects funded by the same donor. According to some observers, fewer than half of the civil society projects in Eastern Europe conducted in the period 2000-2010 were locally designed (Mungiu-Pippidi 2010). The rest were adopted or imported from other countries, and almost all of them were funded by international donors and private foundations. Such projects are often too general to genuinely connect with citizens' everyday lives and problems. Moreover, they do not give citizens immediate and concrete reasons to become involved (such as for the purposes of improving public utilities and services, or to reduce police exploitation) and instead justify themselves in general terms, such as to provide "better governance" or "a better society for all". A crucial risk here is that, instead of reducing corruption, these projects could undermine citizens' trust in the whole civil society sector (Mungiu-Pippidi 2010).

An additional problem related to external funding of civil society activities is that CSOs could be created to promote or conceal corruption schemes. In some cases, CSOs could be used just to take advantage of foreign aid or to meet donor demands that a civil society organization be involved in the management of the funds (Themudo, 2012). Drawing on cases from Afghanistan and some Eastern European countries, Chayes (2015) argues that this is a common scenario in transitional countries that are in the process of building a democracy. International donors are attracted by local "self-promoting activists" who are very persuasive in promising outcomes that donors expect to hear. However, the real objective of these local activists is not always to strengthen democracy, but rather to capture funds. For this reason, in some countries embroiled in conflict or in post-conflict phases, citizens have lost trust in international funding programmes, especially those aiming to promote good governance and reduce corruption (Chayes, 2015).

All these risks and challenges should be considered by civil society actors when planning activities for enhancing citizen participation in the fight against corruption. Moreover, to be effective, all civil society anti-corruption efforts should be tailored to the local context of the given society.

Next:  The role of the media in fighting corruption