In order to tackle organized crime and, in particular, its infiltration and exertion of corrupt influence over legitimate businesses, the United States introduced the offence of racketeering. Racketeering is a newer kind of law with a similar objective to conspiracy and criminal association, but with a broader scope. The offence of racketeering is not included in the Organized Crime Convention. It provides for extended penalties for crimes committed as part of an ongoing criminal enterprise. It is sometimes referred to as RICO for the Racketeer Influenced and Corrupt Organizations (RICO) Act, a United States federal law passed in 1970, and makes it unlawful to acquire, operate, or receive income from an enterprise through a pattern of racketeering activity.

Figure 2.1 illustrates the differences in the three approaches to the criminalization of organized crime. Conspiracy focuses on the planning of criminal acts, criminal association focuses on membership in criminal groups, whereas racketeering focuses on ongoing criminal enterprises. 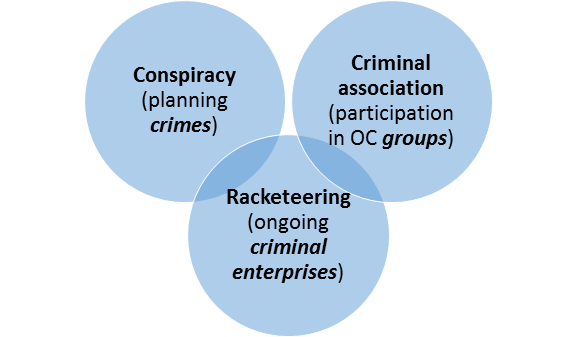 Racketeering is a tool for the criminal justice system to go after those criminal enterprises that engage in ongoing organized crime activity, rather than only prosecute individuals or groups for specific illegal acts. It was observed more than 80 years ago that "racketeering cannot exist without protection" (Chamberlin, 1932). Criminalization of racketeering aims to remove some of the protection that surrounds criminal enterprises by exposing those involved to extended penalties beyond those entailed by the crimes themselves.