Once in Mexico, the money was given to bureaux de change ("casas de cambio") who deposited it into their Mexican bank accounts. The origin of the money was not investigated, which allowed the criminals to place their illegal earnings into the legitimate sector. These funds were then wired to Wachovia Bank's accounts in the United States and the origin, again, was not properly checked. Any remaining bank notes were shipped back to the United States using Wachovia's "bulk cash service." By using these two methods provided by Wachovia, the drug cartels were able to integrate their illegal funds into the financial system. The illicit proceeds that went through correspondent banking accounts at Wachovia were used to buy airplanes to be used in the drugs trade.

Wachovia Bank entered into an agreement with the Department of Justice to resolve the company's role in anti-competitive activity in the municipal bond investments market and agreed to pay a total of $148 million in restitution, penalties and disgorgement to federal and state agencies in 2011. Starting in 2009, the Wachovia Bank was absorbed into the Wells Fargo brand.

The 2017 trial in in Rome, known as the "Mafia Capitale" trial, exposed how Massimo Carminati, who was once a member of Rome's notorious far-right Magliana Gang, and Salvatore Buzzi, a convicted murderer, used kickbacks and intimidation to win city contracts and ultimately pocket millions in public funds for themselves. For years, their organized criminal group controlled key municipal services, including rubbish collection, park maintenance and refugee centres. More than 40 defendants, many of whom were former city officials associated with Carminati and Buzzi's criminal ring, were also found guilty. Among those investigated were former mayor Gianni Alemanno. Massimo Carminati and Salvatore Buzzi were sentenced to 20 and 19 years in prison respectively, after being found guilty of criminal association.

In 2003, the extraordinary trial of the "Năm Cam" case which involved 155 defendants - the biggest case in the history of criminal procedure in Viet Nam up to that time - shocked the Vietnamese public and seized a great deal of domestic and foreign media attention. After more than 3 months of hearings, the Ho Chi Minh City People's Court imposed the death penalty on southern mafia-style crime boss Trương Văn Cam, better known by the nickname "Năm Cam", and five of his associates (one death penalty on an accomplice was altered on appeal). "Năm Cam" was found guilty of numerous charges including murder, bribery and organizing illegal gambling. Sixteen officials, including two members of the Communist Party's powerful Central Committee and several high-ranking police officers, were punished with prison terms.

The indictment indicated that "Năm Cam" amassed a fortune during a decade at the top of an underground criminal network that consisted of gambling dens, loan sharks, protection rackets and prostitution rings. His criminal web spread from its Ho Chi Minh base to other southern provinces and the capital Hanoi, and attracted partners from Taiwan and Cambodia. It was suggested at the time of his arrest that "Năm Cam" raked in about USD 2 million per month from the protection of hundreds of restaurants, discos and illegal gambling clubs. The investigation revealed that his considerable criminal proceeds were primarily invested in several famous restaurants and discos in Ho Chi Minh City, real property, used for bribery, and transferred abroad. His legal businesses made him known as a successful businessman in Ho Chi Minh City's entertainment industry. The magnitude of his dealings made it extremely difficult for the competent authority to determine, trace and locate the illegal root of his property. Therefore, he was not convicted of money-laundering and the appeal court finally ordered to confiscate only a small part of his private property.

In 2003, "Năm Cam" was found guilty of ordering the assassination of a gangster boss, commissioning an acid attack on a rival, giving out bribes and running illegal gambling. He was sentenced to death. The trial also involved several former high-ranking officials, including a vice minister of public security, the director of the state radio and a vice national chief prosecutor.

Benoît Roberge - a police officer of the Montreal Police Service, Canada - was found guilty of participation in a criminal organization under the Canadian Criminal Code, section 467.11. He had participated or contributed by act or omission to the activity of a criminal organization for the purpose of increasing the ability of the organization to facilitate or commit a crime. Considering his status of public servant at the time of the crime, he was also found guilty under section 122 of the Canadian Criminal Code, which punishes the breach of trust by public officer.

Mr. Roberge began his careers as a police officer in Montreal in 1985 and retired in 2013. From 1990, when he worked as a criminal intelligence investigator, he developed a particular expertise in the collection and analysis of criminal gang information. According to the court files, he collected sensitive information as part of his regular job duties and then sold it to René "Balloune" Charlebois, a member of the motorcycle gang "Hells Angels".

In 2004, Charlebois was found guilty of murdering a police officer and sentenced to life in prison. In 2013, he managed to escape the maximum security prison where he was detained and when the police caught up to him, he committed suicide. Nonetheless, he left secret recordings that he had made of his telephone conversations with Roberge, which were discovered by the police. Based on this information, police set up an undercover operation that culminated in the arrest and detention of Roberge.

It was discovered that Roberge informed Charlebois of the existence of two ongoing police investigations: a police investigation into drug trafficking and another targeting the Hell's Angels, including revealing information about suspects and the investigative techniques used. It was also discovered that Roberge gave information about the psychological state of a witness who was to testify in a case. In exchange for his information, Roberge received approximately $125,000, most of which (over $115,000) was recovered.

On 13 March 2014, Benoît Roberge pleaded guilty to one charge of participation in a criminal organization and one charge of breach of trust by public officer. Having served half of his seven-year sentence, the Montreal Gazette reported that he had a hearing at the Parole Board of Canada on 16 May 2017. Roberge confessed that "working constantly with criminals, especially those who led double lives as informants, caused him to live in 'a grey area' where his morals became elastic." The hearing ended with him being granted full parole. 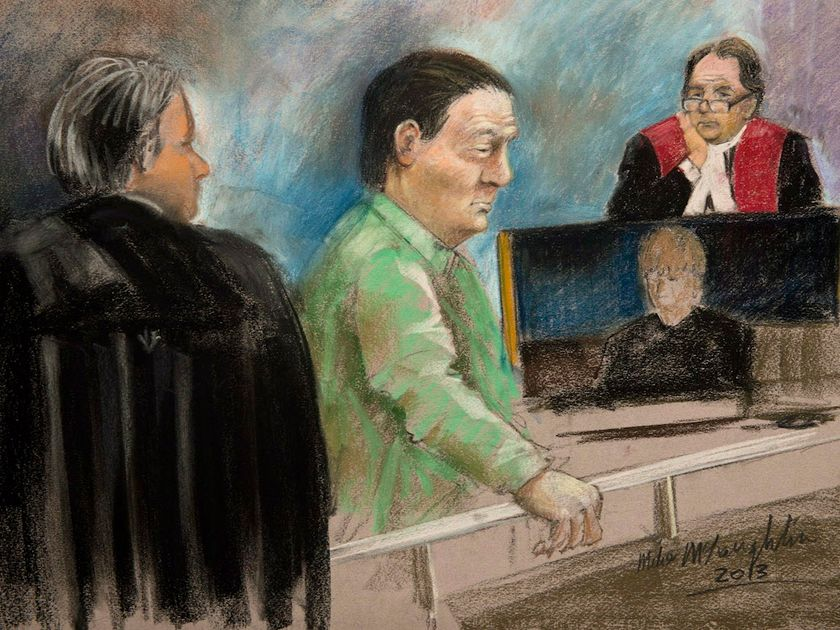