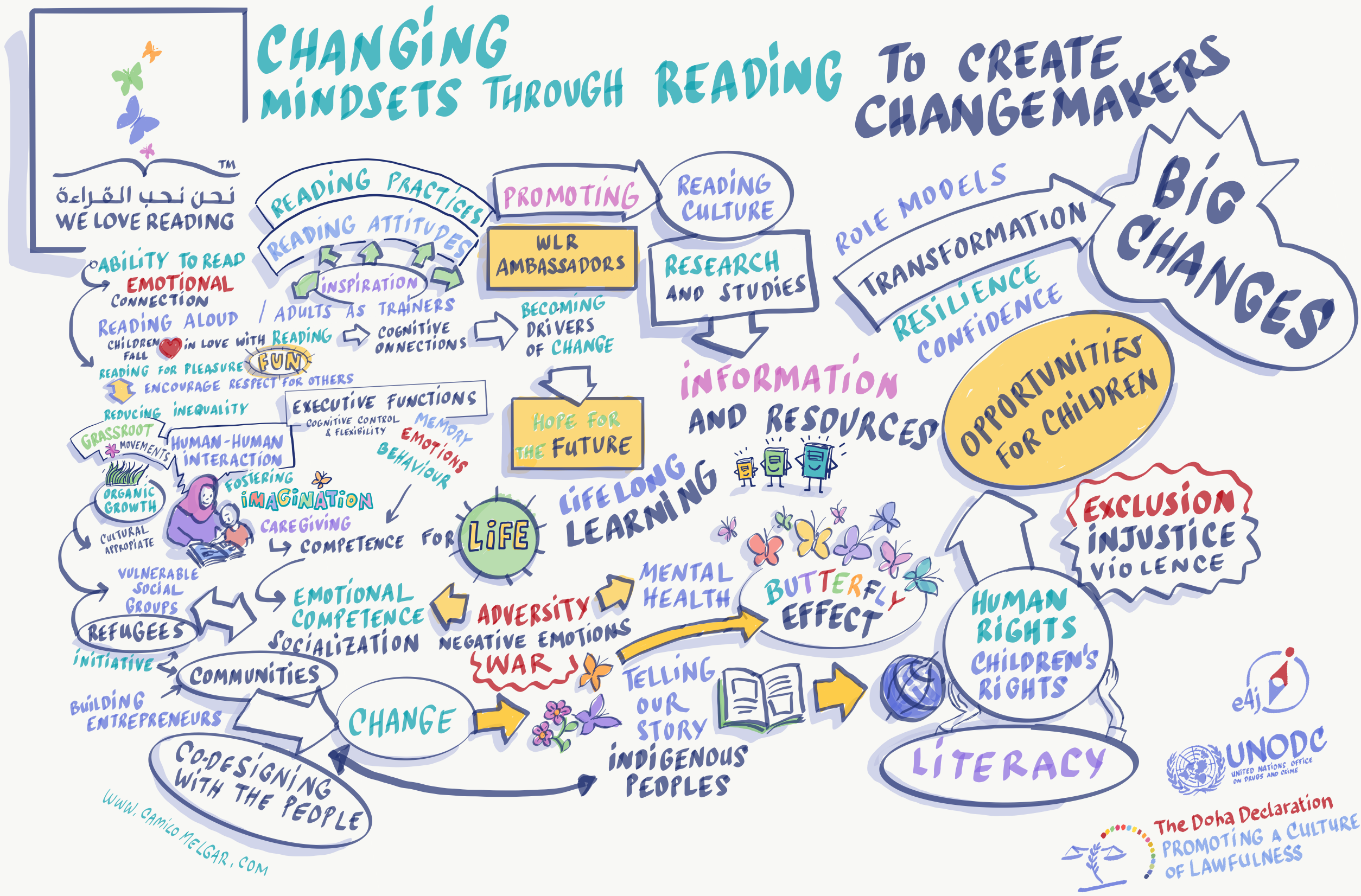 This session brought research experts and practitioners as well as people on the ground to share and discuss how We Love Reading, a grassroots program and 2020 UNHCR Nansen refugee awardee, has been able to change mindsets through reading to create changemakers. The program adopts a holistic approach including children, youth and adults especially females as well as the wider community to ensure sustainability and scalability. The session also highlighted how We Love Reading adapted technology during COVID19 to reach vulnerable communities in a collaborative manner in order to serve as a placeholder for education, improve mental health and boost social justice. 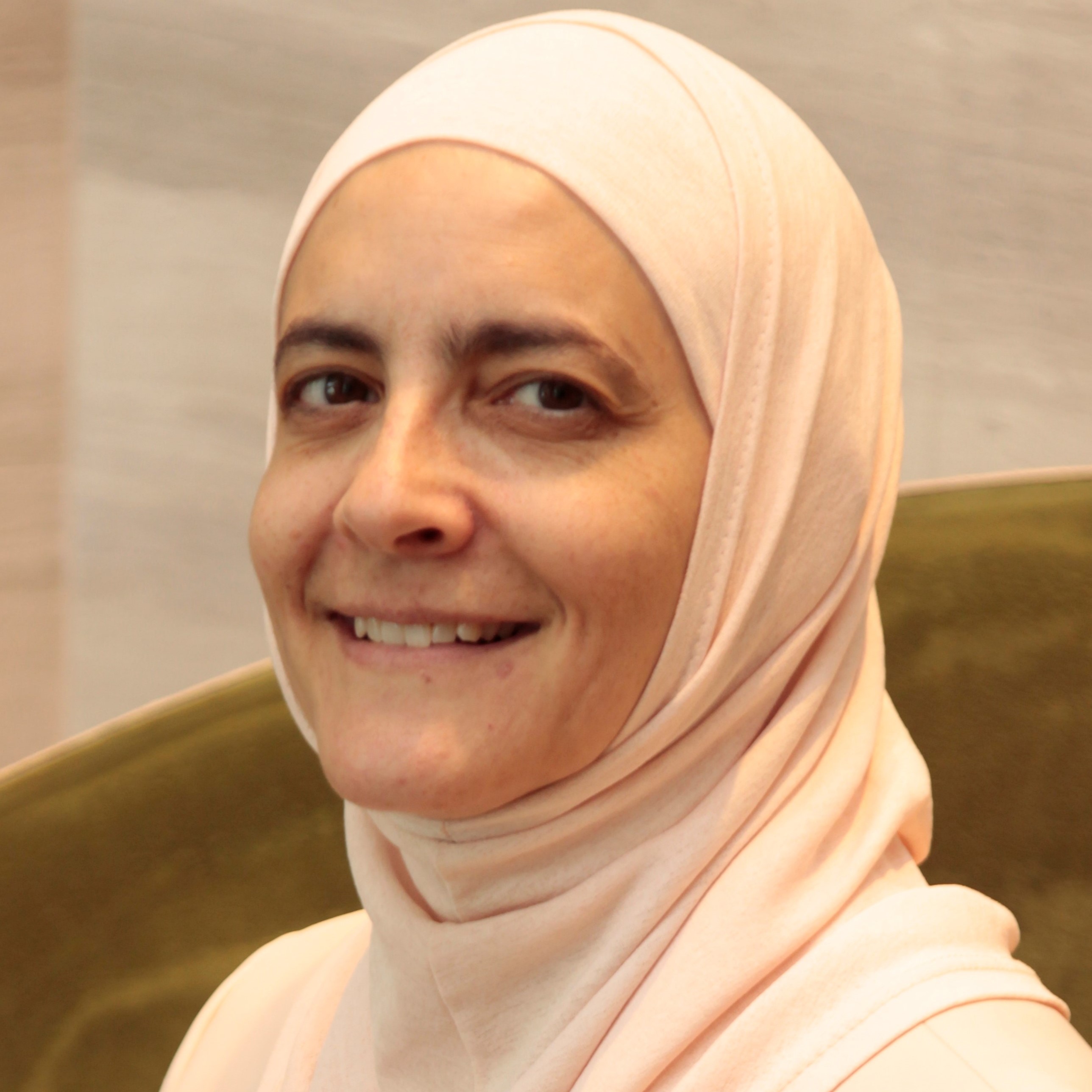 Professor of molecular cell biology, Jordan, visiting professor Yale, Cambridge and Harvard. Most influential women scientists in Islamic World, 12th among the 100 most influential Arab women. President of the Society for the Advancement of Science, Technology and Innovation in the Arab World.

Author of the book: Five scarves, Doing the impossible: If we can reverse cell fate why cant we redefine success, Nova Publisher 2018; reviewed by Nature.

Her research examines the development of attention, executive functions, and memory, with an emphasis on how environmental variables shape these trajectories. She has authored over 80 papers on the topic. Dr. Amso’s research has been funded by National Institute of Mental Health, the National Science Foundation, the National Institute of General Medical Sciences, National Institute for Child Health and Human Development, the Simons Foundation, Norman Prince Neuroscience Institute, and the Hassenfeld Child Health Institute. She is a recipient of the James S. McDonnell Scholar Award and is an elected Fellow of the American Psychological Society. 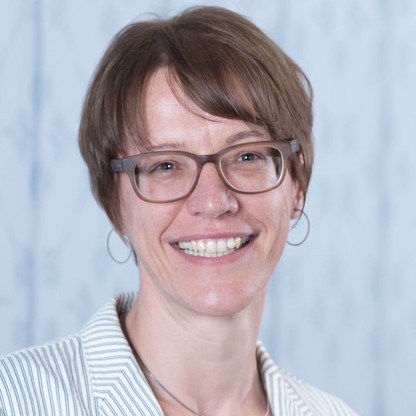 Antje von Suchodoletz is an Assistant Professor of Psychology at New York University Abu Dhabi, UAE, where she leads the Teaching, Learning and Development Lab. Her research interests lie in understanding the dynamic and transactional caregiver-child and learning processes underlying young children’s development across contexts and cultures. She holds a PhD in Psychology from the University of Konstanz, Germany. Her recent publications appear in Child Development, Early Childhood Research Quarterly, and Learning, Culture and Social Interaction. 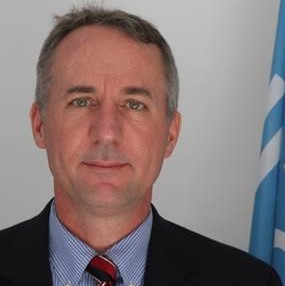 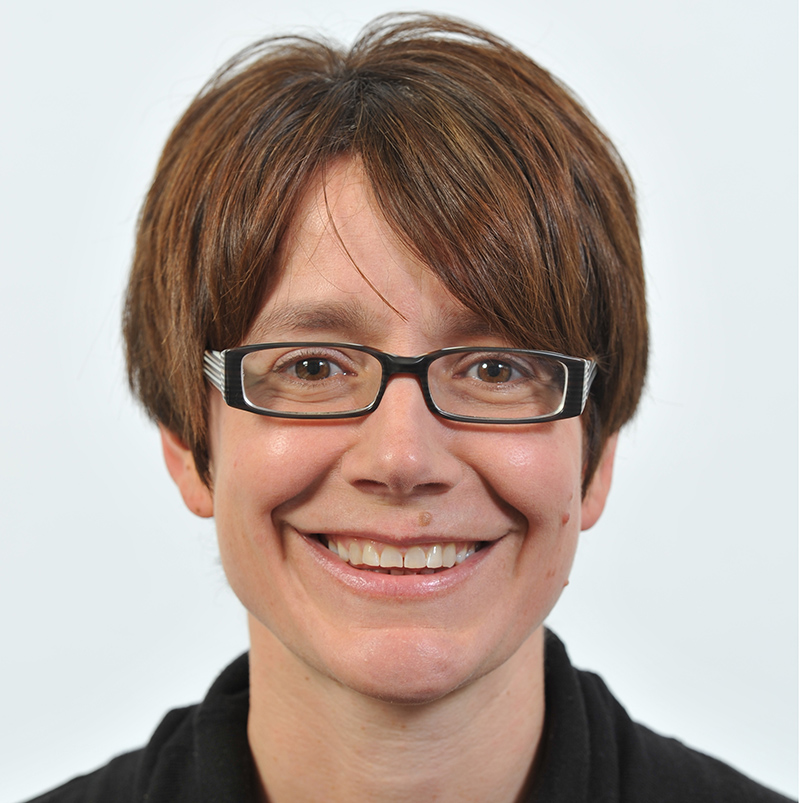 Dr. Mareschal completed her PhD at McGIll University in Visual Physiology in 1999. Following this, she held postdoctoral positions at New York University, University College London and The University of Sydney. In 2013 she joined Queen Mary University as a Assistant Professor and is now Associate Professor and Head of Department. Her research investigates how visual perception affects cognition, with a particular focus on social cognition. In the last few years she has been working on the development of social cognition in children who have suffered early adversity. 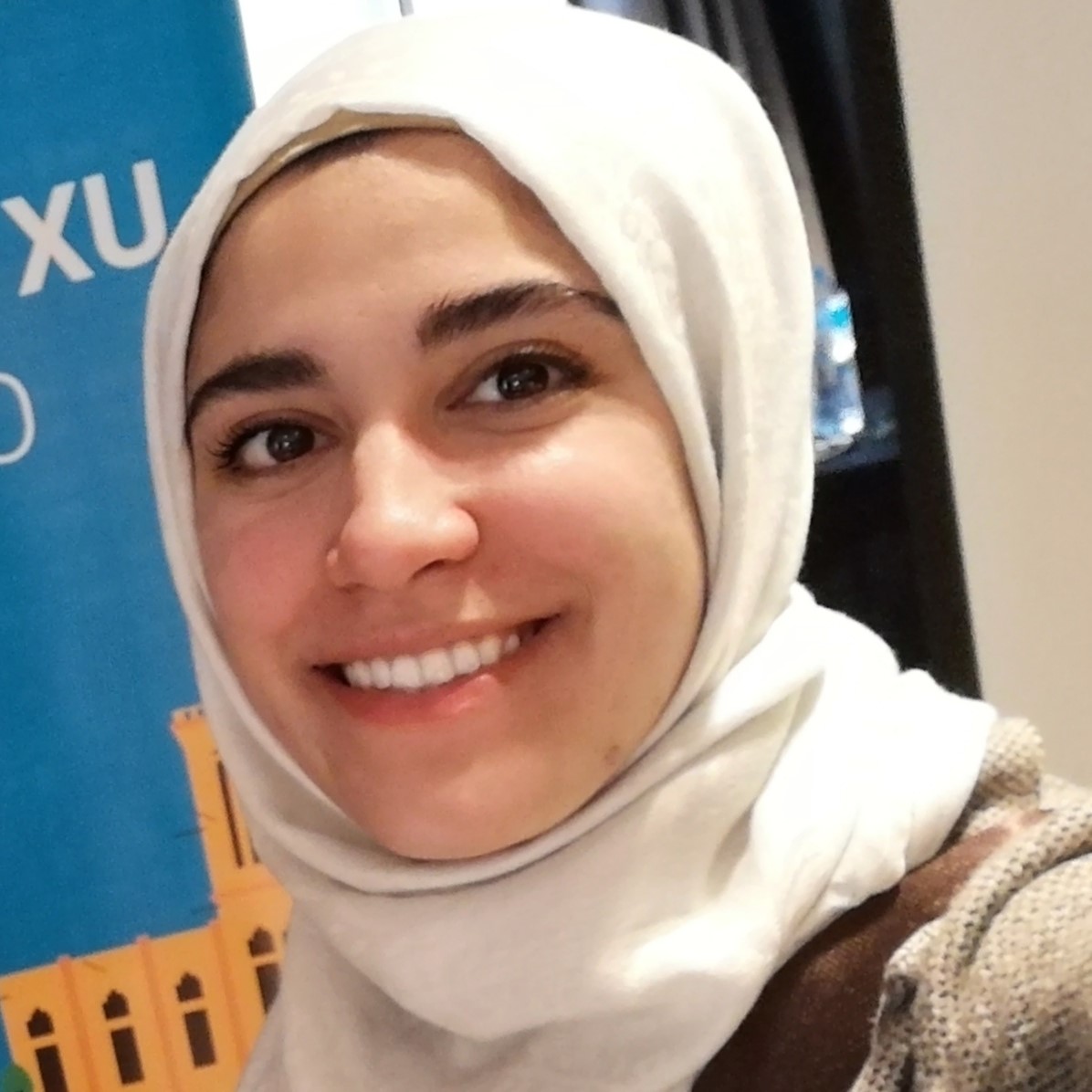 Ghufran Mustafa is a WLR Ambassador Trainer and Communication Officer at We Love Reading program. She trains local volunteers on how to read aloud for children and how to establish their own neighborhood library. She has a Bachelor of Science degree in Genetics and Biotechnology and currently doing her Masters in Social Anthropology at Yarmouk University with a focus on translation and etymology of Arabic Anthropological terms. With five years’ experience in humanitarian field, she gained adaptability, flexibility and the ability to work under pressure. 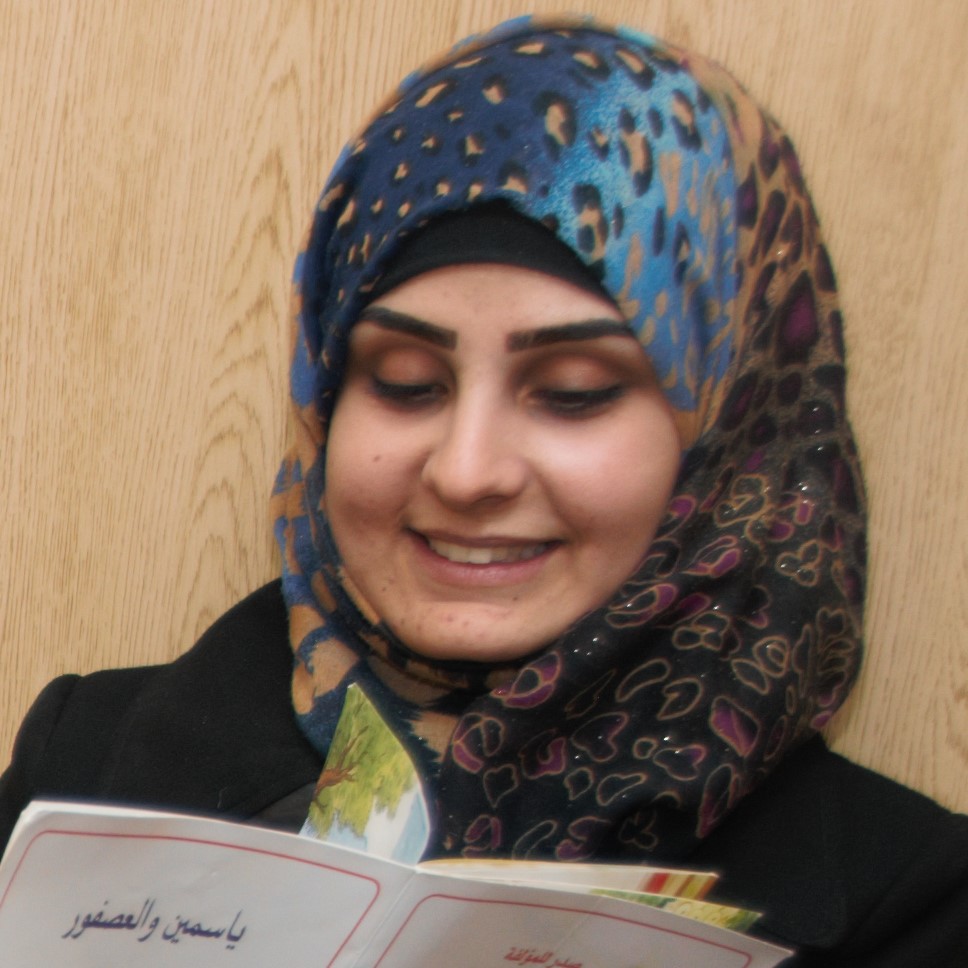 Asma‘a Rashed is a Syrian woman from Dar’a living in Zaatari Camp in Mafraq since 2013 because of the Syrian crisis. She has become a We Love Reading ambassador in 2014 and this has revived the passion for change inside of her. Shortly after the WLR training, Asma‘a started writing her own stories and a talented nephew has helped her illustrate those stories and published them in Al-Tareeq magazine.