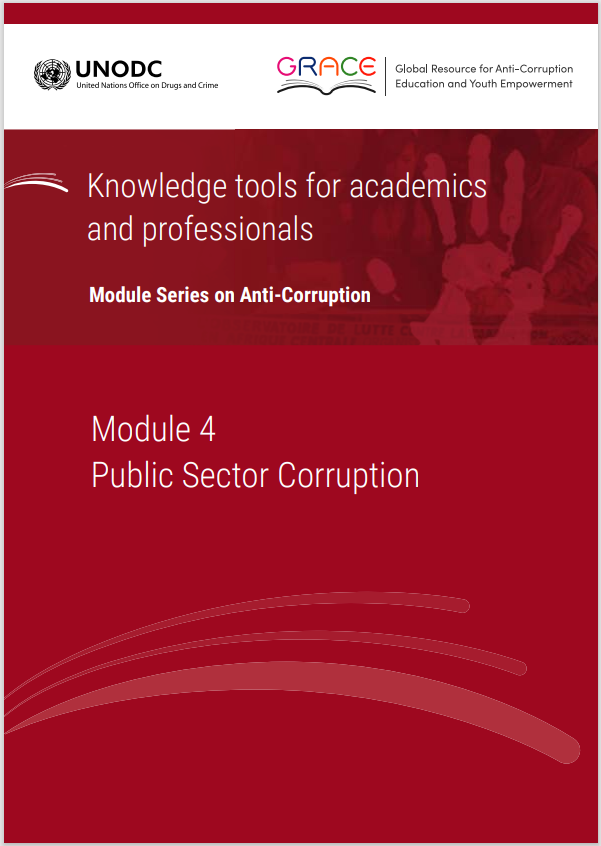 One of the most corruption prone government activities is public procurement. The reasons for this include "the volume of transactions and the financial interests at stake" as well as "the complexity of the process, the close interaction between public officials and businesses, and the multitude of stakeholders" (OECD, 2016). In some countries, abuse of the government-spending process "has become the gateway to fortune" (Salisu, 2000). Corruption in public procurement can be a problem in both developed and developing countries, although some forms of corruption are more prevalent in certain countries, according to the United Nations Office on Drugs and Crime (UNODC, 2013a). OECD (2014) highlights that 57 per cent of all foreign bribery cases are due to procurement corruption.

Corruption in public procurement takes many of the forms mentioned above, such as bribery, embezzlement and abuse of functions. Discussing this area in depth therefore provides concrete examples of how corruption manifests in the public sector, in ways that are relevant to our everyday lives. In addition, corruption in public procurement warrants consideration as it has unique causes and impacts. Procurement corruption may occur as a result of a conflict of interest situation where a public official wants to secure for him- or herself and related parties, the benefits which rightly belong to the public, by bypassing the formal requirements for the awarding of these privileges. Public procurement is particularly susceptible to corruption such as collusion to fix prices, maintenance of cartels, and other practices that thwart competition and mean that government does not receive value for money in the procurement process (Williams-Elegbe, 2012). After defining public procurement and the related concept of financial management, examples of procurement corruption will be used to illustrate the causes, manifestations and consequences of public sector corruption as well as corruption more broadly in the society.

Public procurement is the process by which the government buys the goods, services and works (construction) it needs to function and maximize public welfare. The public procurement system referred to in this Module is the entire system for government purchases, including budgeting, governance, auditing and accountability systems. Apart from grants and social programmes, it is one of the major avenues through which public finances are expended, and the large amounts of money involved can provide opportunities for unethical practices such as fraud and corruption.

Public procurement accounts for a significant amount of government spending: the OECD estimates that countries spend an average of 13 to 20 per cent of their GDPs on procurement (Transparency International, 2014). Public procurement is often subject to extensive legal and administrative regulation, with the aim of safeguarding public funds and using tax payers' money judiciously. The goal of a procurement process is to obtain the necessary goods, services or works at the best value possible, often referred to as the " most economically advantageous tender (MEAT)". This includes a consideration of several factors such as price, quality, functionality, life cycle and disposal costs, as well as after-sales service, where relevant.

The procurement system is used to achieve a range of public policy goals through government spending. Examples are: encouraging the production of environmentally sustainable goods; involving small companies, minorities or disadvantaged groups in economic activity by reserving a portion of government contracts for persons from the target groups (Arrowsmith and Kunzlik, 2009); and promoting compliance with human rights by ensuring that companies that access government contracts are compliant with specified human rights and their supply chains are free from modern slavery (Martin-Ortega and O'Brien, 2019). Procurement is also used for military and national security goals. For further discussion on this, see Module 11 of the E4J University Module Series on Anti-Corruption.

The public procurement system is an integral part of the larger system of public financial management (PFM) and fails or succeeds on the strength of that system. As explained on the website of the Norwegian Agency for Development Cooperation (NORAD): "PFM includes all components of a country's budget process - both upstream (including strategic planning, medium term expenditure framework, annual budgeting) and downstream (including revenue management, procurement, control, accounting, reporting, monitoring and evaluation, audits and oversight)." A good PFM system ensures that the public sector can fulfil its role; improve the quality of public services; build public trust in the public sector; and ensure the efficient and effective use of public funds. A good PFM also ensures fair and transparent competition and avoids collusion and the influence of cartels. Therefore, establishing an adequate PFM system is an important measure for mitigating the risks of corruption in government spending.

Impacts of corruption in public procurement

Corruption in public procurement carries all the negative impacts of corruption generally. Tanzi (1998) observes that the negative economic and social costs of corrupt actions, in terms of wasted resources, inefficiency and missed opportunities, are always higher than the benefits that could be obtained through such actions. This ultimately reduces public trust in government and erodes the public integrity necessary for advancing public good (see also Module 13 of the E4J University Module Series on Integrity and Ethics).  For example, during the organization of the 2010 Commonwealth Games, India has experienced numerous procurement related problems, such as lack of competition and fixed tenders, which eventually led to significant delays and higher costs for products of lower than the expected quality (UNODC, 2013b). In the context of procurement, research commissioned by the European Anti-Fraud Office (OLAF) suggests that in the European Union direct losses from procurement corruption may be up to 18 per cent of project costs (PwC, 2013). Aside from direct financial losses and increases in the cost of government contracts (Rose-Ackerman and Palifka, 2016), procurement corruption can cause varying degrees of harm to citizens, the public sector and the private sector.

To minimize the negative impacts of procurement corruption, article 9 of the United Nations Convention against Corruption (UNCAC) requires States parties to "take the necessary steps to establish appropriate systems of procurement, based on transparency, competition and objective criteria in decision-making, that are effective, inter alia, in preventing corruption". Article 9 also requires transparency and accountability in the management of public finances, including budgeting, reporting on government revenue and expenditure, auditing and risk management.

Causes of corruption in public procurement

In general, all factors that cause corruption in the public sector apply to the area of procurement as well. However, public procurement is susceptible to corruption for some specific reasons.

The first one is the potentially large sums of money involved and the large volume of contracts. According to Ferguson (2018), public procurement projects account for up to 50 per cent of the annual government spending worldwide. Some of the largest documented schemes of corruption occur in this sector. Operation Car Wash (the Odebrecht case) was described by the United States Department of Justice as " the largest foreign bribery case in history". This case implicated officials in more than twelve countries and led to prosecution and conviction of several company officials (Lessa, 2017). Another example is the Alstom case where the director of the French engineering firm Alstom was convicted of conspiracy to bribe Lithuanian public officials to secure a contract.

Second, the government departments responsible for procurement, also called procuring entities, are non-commercial by nature. They tend to focus on non-commercial endeavours and may not have systems in place to respond to the risk of corruption inherent in the more commercial nature of procurement processes. Finally, owing to discretion allowed in the process of designing the evaluation criteria, a public official may improperly exercise his power to decide what firms to invite to tender by designing evaluation criteria that favour a particular company, or by manipulating the process to award a contract to a preferred firm (Soreide, 2002). A public official may also split a large contract into several small contracts to circumvent rules that require publication and transparency for larger contracts (Williams-Elegbe, 2012). Private firms may seek to avoid producing the documentation required to participate in a procurement process, or to commit fraud (such as raising improper invoices) when dealing with the public sector with the complicity of public officials (OECD, 2016), or to obtain confidential information on the tender or on competitors (Soreide 2002).

Next: Corruption in state-owned enterprises