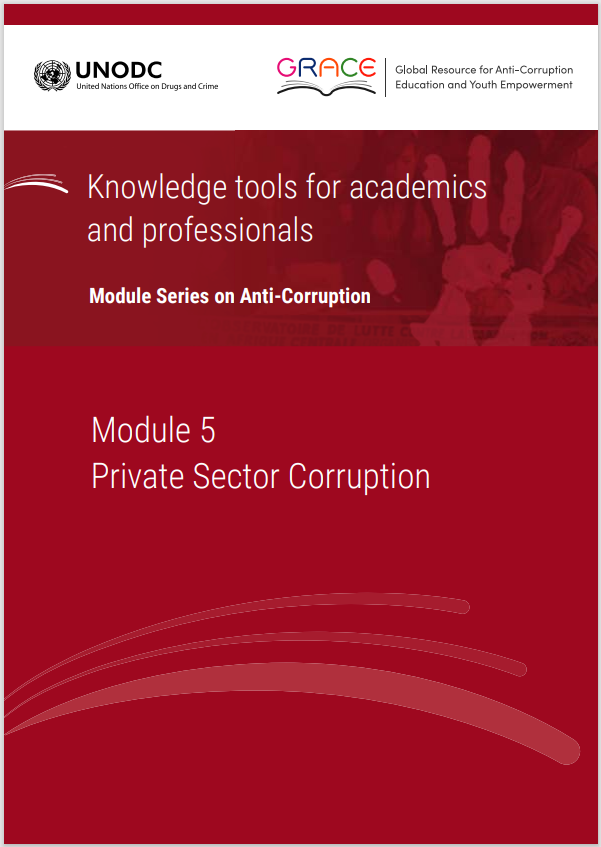 This Module has reviewed so far the implementation of a global regime based on the application of a principal-agent relationship. In other words, the parent company (the principal) is responsible for the acts of its subsidiaries, intermediaries and third parties (the agents). This strategy is useful in reducing bribes in international business and in global supply chains. It considerably increases the likelihood that multinational companies sanctioned for corruption in one country will forfeit business opportunities in other countries, owing to blacklisting or ineligibility for public tenders.

However, this strategy may be insufficient when corruption is systemic, for example, because it has spread and is deeply embedded in public-private networks, or because it is supported or even organized by the government. Facing systemic corruption, companies may be left with no choice but to withdraw from the specific market, with the unintended policy consequence of leaving the market in the hands of less scrupulous players. Moreover, when corruption is widespread, a legal intervention based on corporate liability may generate costly transitions. In Latin America, for example, the Odebrecht case involved hundreds of companies, many of which went bankrupt or are on the verge of bankruptcy. In Brazil alone, over 100,000 workers lost their jobs. Avoiding these abrupt transitions - which often promote setbacks that perpetuate corruption - requires a different strategy.

In markets with systemic corruption, companies face a " prisoner's dilemma" in which they fear a competitive disadvantage if they refuse to engage in corrupt practices, such as loss of contracts. This has also been described as the "collective action problem", discussed in further detail in Module 4 of the E4J University Module Series on Anti-Corruption. The prevailing sentiment is that if one company does not bribe, the competitors will. In other situations, distrust is minimized through the formation of cartels - sometimes even encouraged by the State. In both cases, the result is an exponential increase in collective costs.

The answer to these problems requires an agreement, similar to a multiparty contract: an agreement in which different stakeholders commit themselves to a new normative balance. For this approach to work, most stakeholders must have the expectation that their peers will abide by and make others comply with these new rules.

These collective and coordinated approaches are often called "collective action" initiatives, and have been defined as follows (World Bank, 2008, p. 4):

"Collective action" is a collaborative and sustained process of cooperation between stakeholders. It increases the impact and credibility of individual action, brings vulnerable individual players into an alliance of like-minded organizations and levels the playing field between competitors. Collective action can complement or temporarily substitute for and strengthen weak local laws and anti-corruption practices.

Collective action initiatives can take on various forms, ranging from short-term agreements to long-term initiatives with external enforcement. Companies that participate in such initiatives can pursue their common objectives much more effectively in a joint and concentrated effort than they can individually. Collective action initiatives can be formed either in the private sector alone (e.g. SMEs requesting harmonized supplier standards from larger companies) or involve public-private partnerships (e.g. collectively addressing single challenges such as facilitation payments, or advocating for an improved regulatory and business environment). An example of the former type of collective action approach is the Jornada Íntegra initiative, which was launched in 2019 in Brazil by the international business platform Alliance for Integrity. This initiative aims to support Brazilian small and medium-sized enterprises (SMEs) in creating more ethical and sustainable business environment.

Nowadays, companies are increasingly adopting anti-corruption approaches in collaboration with the public sector and civil society as well as academia. These collective approaches have great potential to reduce corruption in society in the broadest sense, for several reasons. First, corruption is so complex that it cannot be solved by either governments or companies acting alone. Thus, while the private sector is part of the problem, it is also part of the solution to fighting corruption in society. Secondly, while companies are a common source of corrupt funds, they are also victims of corruption and thus have a shared stake in reform. Thirdly, governments can benefit from the expertise and resources that ethical businesses are able to bring to the fight against corruption. With collective action, companies of all sizes can become meaningful agents of change in relation to anti-corruption policies and procedures, stimulating efforts in the private and public sectors to decrease corruption and engage in effective reform.

Collective action can involve private as well as government actors - a collaboration referred to as a public-private partnership. A recent example of collective action based on a public-private partnership is the intervention led by the Maritime Anti-Corruption Network (MACN) in Argentina along with several business associations that operate in the maritime transport sector. The intervention aimed to reduce corruption during inspections of the holds and tanks of the bulk carriers conducted by the National Service of Health and Agri-Food Quality in Argentina. The inspections were supposed to ensure that the means of transport were in adequate condition to avoid contamination of agricultural products. However, an illicit business worth about $30 million per year developed because of a combination of factors, namely: the unsupervised discretion enjoyed by the inspectors, the costs derived from the delays caused by the disapproval of the warehouse, and the lack of transparency and regulation of the entire inspection process. These conditions facilitated bribery, paid by ships in poor condition to obtain the undue benefit of approval, and commercial extortion of vessels in good condition that paid to avoid costly and unjustified delays. Over time, the extent of systemic corruption in these inspections affected not only individual companies who had to add bribery to their business costs, but international trade in Argentinian agricultural products more broadly, to the extent that the higher costs and legal risks discouraged foreign companies from trading in the country.

To address this case of corruption, MACN members engaged with all stakeholders, including the government, in a process that took more than three years to re-design the investigation process. The discussions evaluated the commercial, legal and financial advantages and disadvantages faced by each stakeholder and how a level-playing field would affect them. In agreement with all stakeholders, the Government reformed the regulatory framework in November 2017. The collective action continued during the implementation of the reform, through meetings with all stakeholders and training of operative personnel, both in the public and private sector. Bribes decreased to almost zero, and in the few instances where corruption occurred, the incidents were reported and sanctioned.

Interesting discussions and examples of collective action approaches are included in this B20 paper from 2014. The paper proposes ways to enhance the private sector's role in the fight against corruption, including by improving its collaboration with governments and international institutions. The paper contains many useful case-studies that illustrate different approaches to achieving such collaboration.

Further information on collective action and public-private partnerships is available in the UNODC's An Anti-Corruption Ethics and Compliance Programme for Business: A Practical Guide . The Basel Institute of Governance maintains a database of collective action initiatives against corruption. The above mentioned United Nations Global Compact, Alliance for Integrity, PACI and B20 are other well-known examples of global collective actions initiatives.