As noted earlier, in many cases financial investigations are essential to detect and punish smugglers. Hence, the critical role of FIUs in suppressing migrant smuggling. The variety of methods by which payments are made and through which money circulates in the context of migrant smuggling ventures vary considerably. Financial investigations will concern the gathering of information and collection of evidence - and respective analysis - regarding proceeds of smuggling of migrants. They will focus on evidence that reveals cash flows and money trails, for example bank accounts and wire transfers, credit card reports, money transfer slips (such as MoneyGram) and Hawala system records (see Tool 7 Law Enforcement and Prosecution, UNODC, 2010).

Migrant smuggling is a crime for profit. This is the motivation of smugglers. Following the money will likely lead to the leaders of organized criminal groups. 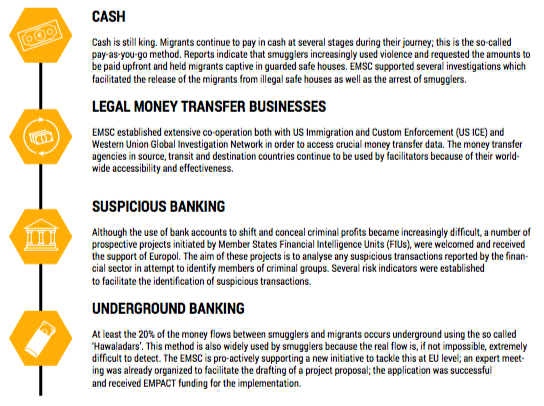 Accordingly, financial investigations should run parallel to smuggling investigations and be launched as early as possible. Effective financial investigations require staff with strong analytical and technical skills. National laws will necessarily need to be examined as they impact on the scope of the investigation. Rules on banking secrecy might be critical. Privacy concerns must also be examined, as there is always a risk of evidence being deemed inadmissible. A successful financial investigation will lead to the identification of proceeds of crime and their seizure, and possibly also to the identification of high-level organizers. Likewise, it will identify important assets to be confiscated, namely those used in, or which facilitate, the commission of the crime (article 12 of UNTOC).