Broadband technology in developing countries is slow, resulting in the populations of these countries using mobile technology to access the Internet (Statista, 2018). Because of the availability of Internet services through mobile devices, Internet use has been consistently growing (Statista, 2018). Smartphones are becoming less expensive with more features, and mobile service providers are providing more reliable Internet over less-expensive cellular networks. This is contributing to increased Internet penetration rates in many countries. 2016 was the first year in which mobile device access made up the majority of worldwide Internet usage (Statcounter, 2016). 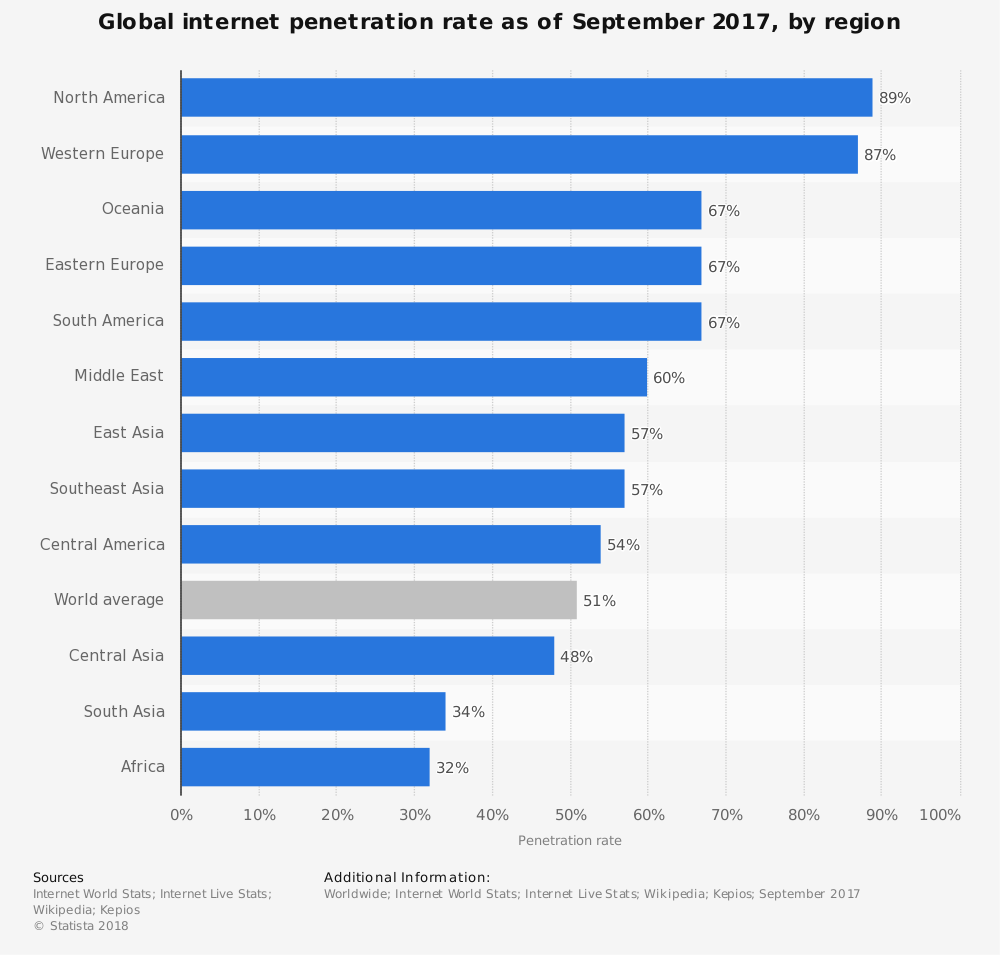 As connections to the Internet become more reliable and more people connect, more important services tend to be provided online. For example, Internet connectivity is very fast and very reliable in South Korea. As of 2018, the Organisation for Economic Co-operation and Development (OECD) estimates that South Korea has a 99.5% household Internet penetration rate. With so many people connected, the Korean Government and businesses are offering more services online. For example, if you receive a speeding ticket (automatically from an Internet-connected speed camera), you can check a government website to view your speeding ticket information. You can then pay your ticket instantly through an online bank transfer. The process can be completely paperless. In some cases, there are fewer supported offline government services than online services.

China is currently experiencing a similar situation to a higher degree. According to the 41st Statistical Report on Internet Development in China released in January 2018, as of the "end of December 2017, the number of Internet users in China reached 772 million, with an increase of 40.74 million from the end of 2016. The Internet penetration reached 55.8%, up 2.6 percentage points from the end of 2016. […] The number of mobile Internet users in China reached 753 million, an increase of 57.34 million from the end of 2016" (p. 7). Internet services such as instant messaging, online payment, online shopping, online take-out, or online travel booking are accessed by hundreds of millions of users. Apps such as WeChat (an instant messaging tool) and Alipay (a third-party payment tool) have become essential apps for almost every smartphone. Mobile devices, mobile Internet, and these apps are so popular that government services, payments, investments, public and private transportation and many other services are fully integrated in the application (Kessel and Mozur, n.d.). With critical services increasingly being offered online - at times, accompanied by a reduction of offline services, there is also more opportunity to abuse technology and to commit crime.

Next: Cybercrime in brief